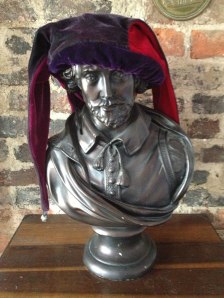 “I pray thee peace, I will be flesh and blood;
For there was never yet philosopher
That could endure the toothache patiently,
However they have writ the style of gods,
And made a push at chance and sufferance.”
— William Shakespeare, Much Ado About Nothing

I am no philosopher, yet Leonato’s metaphor holds; I’ve been waking every morning with an aching jaw from severe bruxism, and by day, I clench my teeth instead.

This has for me in times of stress been a recurring problem for years. In the three months I spent flat-out studying for my master’s exams, I cracked two fillings from grinding at night. Just before my doctoral exams, I  cracked a tooth instead, and ended up with a crown. (Both these despite a mouth guard).

(There have been several work-related periods over the years that have caused similar issues…but I really shouldn’t go into those.)

Right now, I’m woefully behind on writing my dissertation (“Much Ado” is one of “my” plays, by the by), and while I’d like to blame my current stress and resulting sore jaw on that (and perhaps that’s part of it), I’m fairly certain that my house not yet having garnered any interest is what’s currently causing me to wear away what’s left of my enamel.

As per usual in my life (waah), I think it’s mostly due to poor timing. In the early spring, houses in my neighborhood of similar size and state were selling (and at much higher prices than mine) almost overnight. I (perhaps foolishly) waited until the summer sales doldrums to list. Had I not, however, I’d have had two rooms in dire need of painting and an overabundance of stuff junking up the place. My timing…it was off.

But the shockingly fast sales in April and May filled me with false hope – I was certain I’d be packing by now (packing more, really – I have several boxes of overflow baking dishes and the like stored in a friend’s basement, and many of my home-shop tools are currently in my tool chest at work).

It’s been three weeks since my house went on the market, and while intellectually I realize that’s not much time at all as these things go, dentally it feels like far longer.

“Why, this is a very midsummer madness.”— William Shakespeare, Twelfth Night (another of “my” plays)

11 Responses to ‘Tis all men’s office to speak patience’