Trouble Above, Trouble Below

Notice that manhole? It may be soon become of great importance to me.

I got and accepted a surprise offer (friends of friends) on my house in late February, just before I put the finishing touches on the kitchen. I’ve not said anything publicly because I didn’t want to jinx things. I might as well have; “jinx” doesn’t begin to approach what’s been happening since. Malediction? Curse? Execration? Yes – “execration” is the word – because it’s close to “excrescence” and “excretion”; the waste system is one of the problems.

Above my head, the ice damming problem happened just one day after I’d signed all the disclosure forms. And now there’s additional plasterwork and painting. I’d so hoped to be done with plasterwork and painting for at least a month. Oh – and during the melt, part of a soffit came crashing down due to the weight of an icicle. So I’ll be fixing that, too.

And I’m putting on a new roof, a possibility for which I’d budgeted. The current roof would, I’m told, likely last another 3-4 years, but I understand not wanting to buy a house that you know needs major work in the near future … if that’s not the kind of house you’re wanting to buy. It is the kind of house I want to buy. But I’m weird.

OK – a new roof and a brand-spanking new kitchen. All set! What else could possibly go wrong?!

My optimism was misplaced.

I live in what’s called the Lower Mill Creek area of Cincinnati (which I believe is composed of five neighborhoods). In it, much of the sewer system is old and the pipes are too small to handle the influx of sewage from heavy rainwater, so once in a very great while, my basement drain backs up a tiny bit, then drains and is dry by the next day. The Metropolitan Sewer District of Cincinnati is currently underway with “Project Groundwork,” which (among other things) is supposed to alleviate this issue.

Of course I disclosed this drainage “problem” – except I didn’t really think it was a problem; I thought it was merely a result of the old sewage system the city is in the midst of fixing.

Like the smart buyers they are (and I was not), they had the sewer scoped earlier this week during the inspection. It turns out there’s a root-ball blockage, and the old clay pipes are cracked. But that’s not the worst of it. The pipes seem to connect with the neighboring house’s system…under their addition. MSD has no records of when or how this happened, but I’m hearing now that it’s not unusual in old neighborhoods with small plots.

The company that did the scoping wants to use a hydro jet to push out the blockage. No way no how am I (and four out of five experts agree) allowing anyone to force a massive amount of water at high pressure through cracked 50+ year-old clay pipes. That run under my neighbor’s house. Perhaps the blockage can be augered out (with a very long snake drill). But that still doesn’t address the likely imminent problems inherent to 50+ year-old clay pipes. I suppose that, with the blockage cleared, one could have the pipes sleeved or lined, but I would not be comfortable perpetuating the joined system – and there’s no guarantee there aren’t additional problems farther down the line. So I’m worried about paying a lot of money for wasted work, and am investigating alternate solutions.

Tomorrow, I’m having the line scoped by another company, and getting a quote from them on connecting directly from my property to a city main. I sure hope that manhole cover in front of my house denotes a place at which one could tap in; it’s only about 30′ from my main sewer drain. Expensive? No doubt. For this, I did not budget. But I’ll cover the cost of the re-scoping etc. at least, and we’ll go from there on the negotiations and decision making.

So on one hand, I feel lucky that all my hard work has paid off in the form of a good offer from a couple I like a lot, and who would (will, I hope!) love the house and fit in well with my friends here. On the other hand, the luck of the Irish? What a crock of shite. 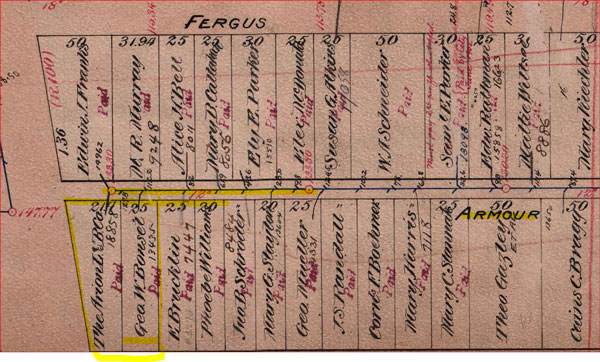 The vintage sewer maps are quite lovely. And quite useless for my purposes.

14 Responses to Trouble Above, Trouble Below