I highly recommend house renovation as a weight-loss regimen. Not only will you work your ass off (literally), you’ll use muscles you forgot you had (you’ll know, because they’ll hurt like hell the next morning), you’ll be too tired to cook, and be far too noisome to eat in a restaurant – and anyway, you won’t be able to afford it. 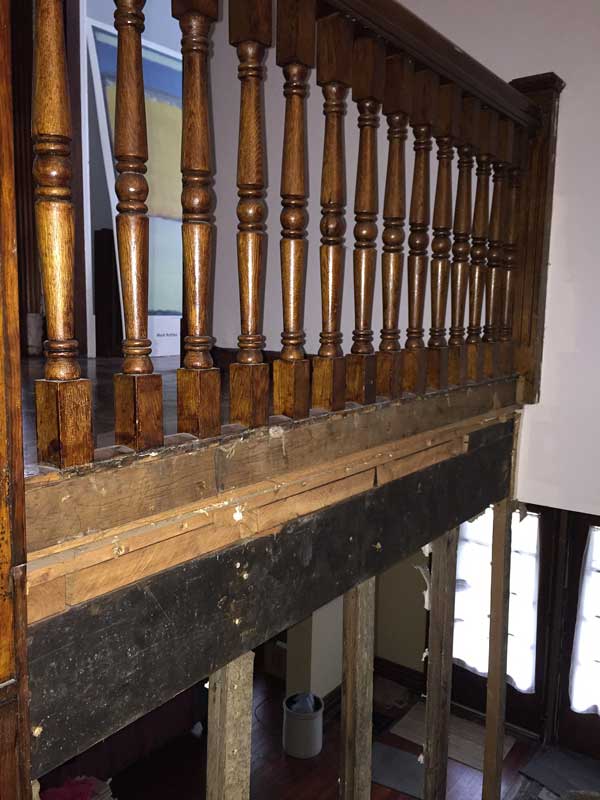 This railing should be back about 5′, aligned with the doorway.

Saturday morning, I began the labor-intensive job of putting the staircase and entry hall back to rights. The first task was to remove both runs of railing. One needs to be relocated about 5′ back; the other should follow the angle of the stairs. 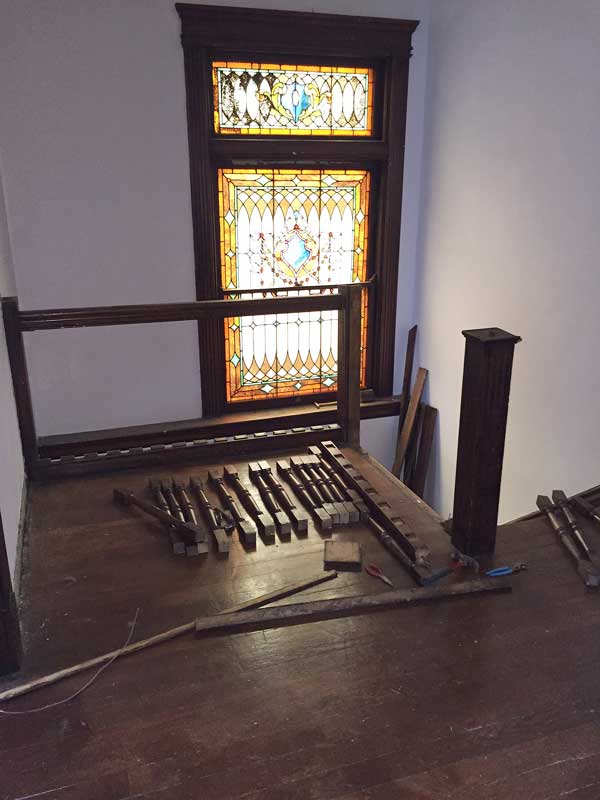 The railing (the one still in place here) was a bitch to remove without damage. the right end was nailed into the newel post; the vintage bolt inside the half-post on the left end was frozen.

For this first bit, I had to work delicately; most of the pieces will be reused, so I had to avoid causing damage. Unfortunately, because the railing that should descend with the stairs was cut so it could tie in at 90° to two posts, it’s no longer going to fit in its proper location. So I’ll have to make a new one, or – if the home-rehab gods are good to me – I’ll find the right one at an architectural salvage yard. 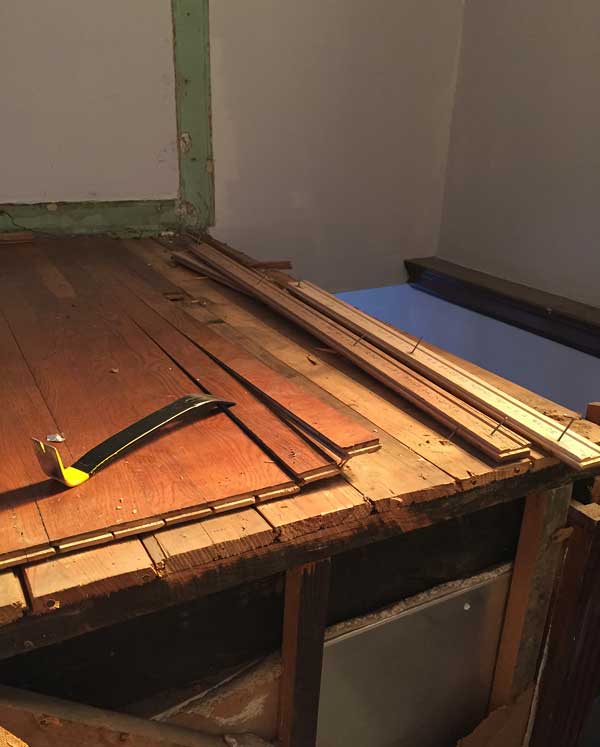 Rather than use joists of matching thickness to the original ones, whomever added this floor built up the thickness using several layers. Thanks for that.

Then it was on to flooring destruction…and because that was all added in the 1950s, I didn’t feel the need to be too careful, until I approached the edge of the original pine floor. So yeah…I cracked off a couple tongues and splintered a few grooves. And that’s OK. 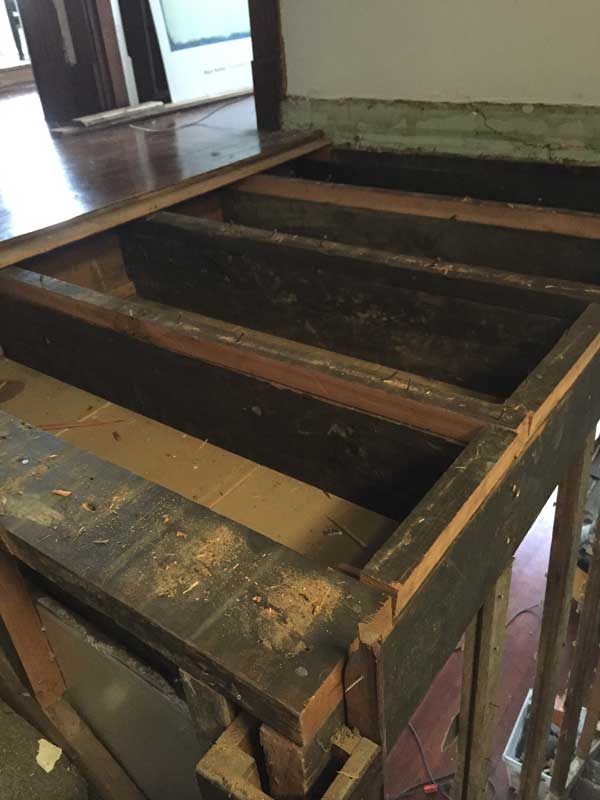 Here’s a view inside. Note the scabbed-on pieces atop the too-narrow aftermarket joists.

The next task got a little lot messy: Removing the ceiling. Back to the original opening location, it was more of that heavy combo of drywall and plaster that was on the walls (at which point, it appears to be actual plaster…glad I don’t need to take that down). So I cut it near the joists, tried my best to break it at the seams, then hung on to the studs for dear life as the weight of each panel threatened to pull me down with it (11′ ceilings…simply dropping it would dent the floor below. DAMHIKT). 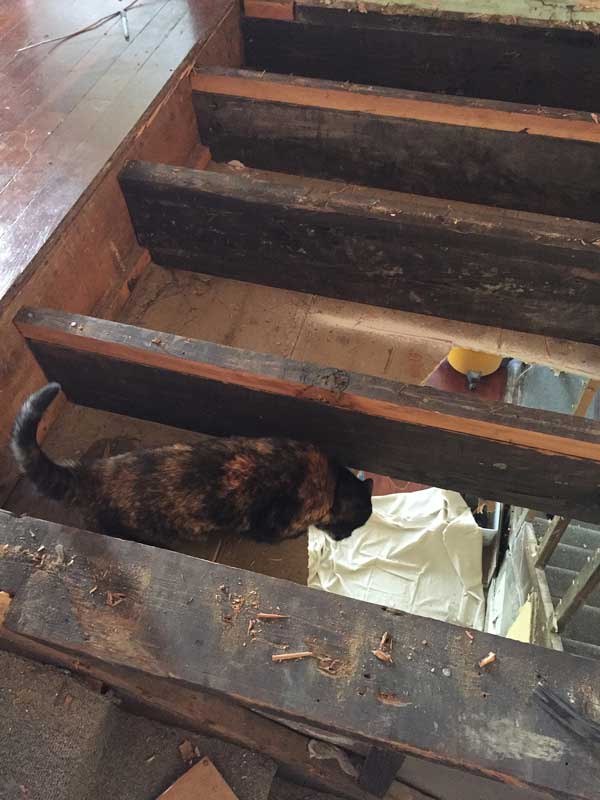 One of the aftermarket joists was a little too short, so I had about a 1/4″ gap between the end and where it met the header. I was able to get a hacksaw in there and cut through the six (?!) nails, then wiggle the heavy piece of wood around to pull out the nails at the other end. But the weight of the wood breaking free almost put me over the edge. 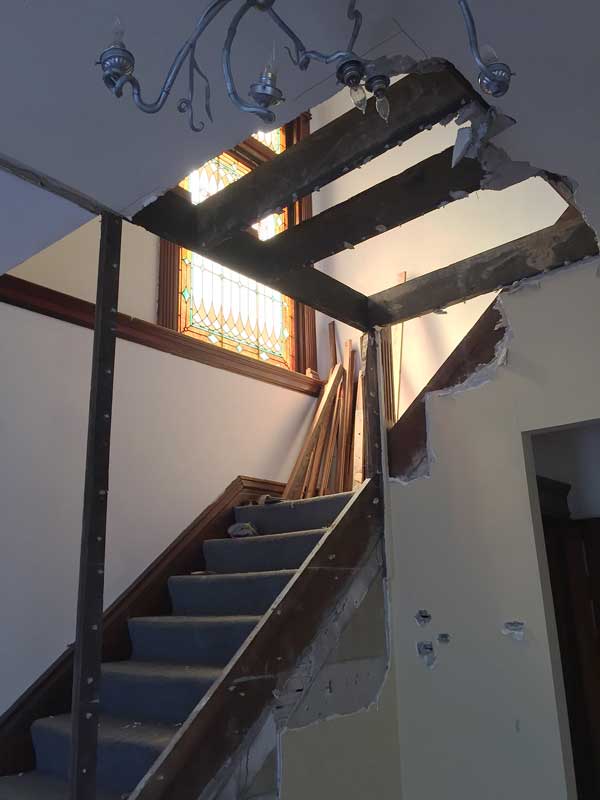 I’m going to get help for the removal of the four remaining joists. The “easy” one was not so easy.

I’m going to have to find an at least semi-skilled friend (and possibly some scaffolding) to get the rest of the aftermarket joists out. Then, I can remove the two remaining studs. I thought it best to leave them on either end for now because they’re holding up the joists I can’t get out by myself…though I suppose cutting those out might take care of the joist problem (but in a manner I’m not willing to risk).

I should take a break and get some dinner. But I’m too tired/gross/poor (I’m saving my pennies for Sawzall blades; I’ve gone through 17 of them so far).

Woodworker, writer, editor, teacher, ailurophile, Shakespearean. Will write for air-dried walnut.
View all posts by fitz →
This entry was posted in Foyer, Renovation/Restoration. Bookmark the permalink.

13 Responses to Try This 1 Easy* Trick to Lose Weight