Smacked by the Stupid Stick 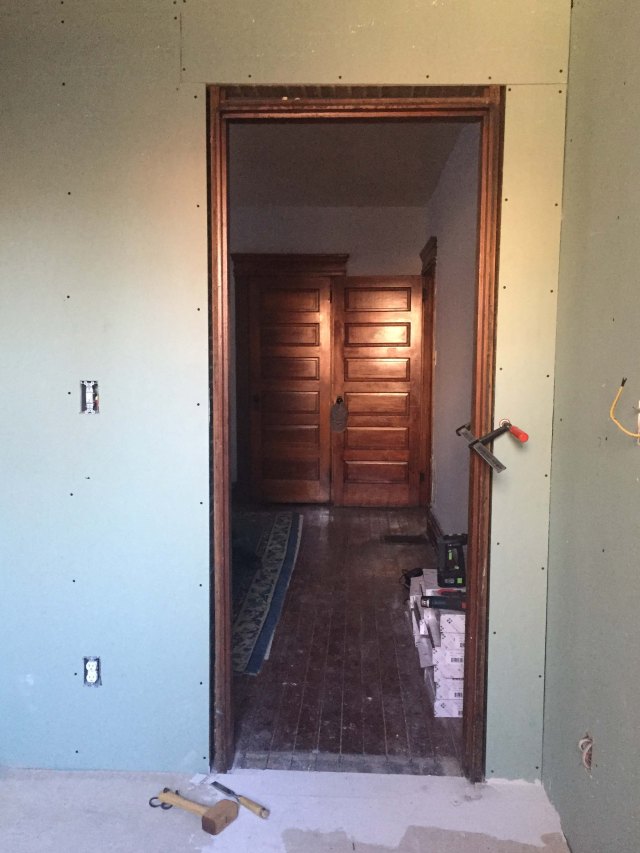 It is with much chagrin that I share an old-house renovation lesson that I’ve just learned the hard way.

Today, my floor tile arrived. In prep for that installation, I need to install in the new doorway from my bedroom to the bathroom the jamb and stop assembly I removed from the former doorway from the hall. When I carefully removed it from its former location, I thought I was being really smart – it should be a perfect fit because I cut then framed the new opening at the exact same size. (And that will in turn make hanging the door a lot easier, given that it’s hung on that exact jamb since 1906.)

So I grabbed my hammer and a box of nails, and …dammit.

Ah well. I’ll now have to add filler strips behind the bathroom-side casing so that it sits flush to the wall and jamb. I flushed the jamb to the other side, where the plaster is still at least semi-intact. I’m hoping the casing (also carefully removed from its former location) will cover up the bits there that are the “semi” of “semi-intact.”

Lesson learned. But I’ll likely forget it by the time I get around to the kitchen remodel.

p.s. See those pine 6-panel doors at the back of the picture? If anyone who lives w/in 200 miles or so of Cincinnati has the same (32″ x 83″, yellow pine, not covered with multiple paint layers) languishing in a basement or attic and wants them gone – let me know! I need a few more, and 6-panel doors of the right size and finish have proven devilishly hard to find in their original-ish state. Hoping to not have to strip…

Woodworker, writer, editor, teacher, ailurophile, Shakespearean. Will write for air-dried walnut.
View all posts by fitz →
This entry was posted in Baths, Renovation/Restoration. Bookmark the permalink.

13 Responses to Smacked by the Stupid Stick