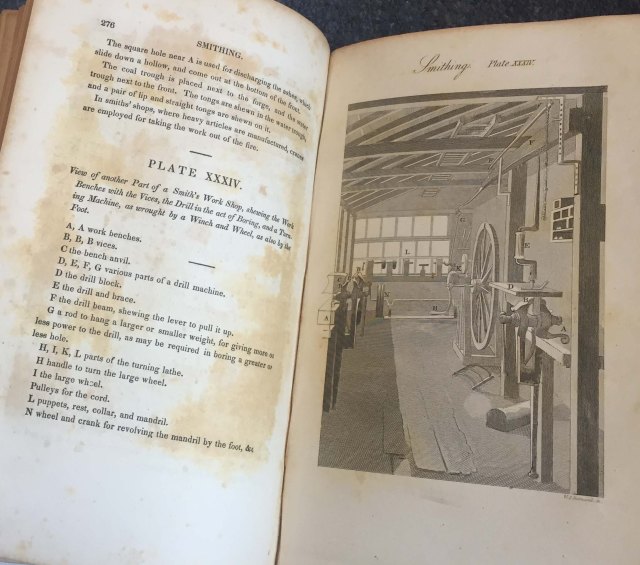 Among the more time-consuming (and eye-straining) tasks in preparing Peter Nicholson’s “Mechanic’s Companion” for publication has been digitally removing the “foxing” from the 175-year-old pages. It’s a balance of taking out the staining while simultaneously rendering the text legible in black and white, with enough contrast to “pop” off the page but not so much that the fox ghosts show through.

Foxing (apparently so-called after the red/brown foxy color of some of the stains*) is a common problem in vintage books, and there is no one explanation for its cause. The American Institute of Conservation’s (AIC) site says there are “currently three major explanations” with a fourth one proposed: “a) fungal activity b) metal-induced degradation, and c) multiple causes.” The proposed cause – which must mean it’s not yet accepted – is “general discoloration of paper caused by the interaction of moisture and cellulose.” (There is – and I find this fascinating – a Classification of Foxing, including “Bullseye” (small, round spots with a dark center surrounded by concentric rings) and “Snowflake” (which is mostly what I’m dealing with – “spots with scalloped edges and/or irregular shapes which can measure inches across”).

There are numerous treatments to arrest and reverse the process on the paper, but I’m going the electronic route; like all good things, it takes some work. Every page presents a different stain pattern, distribution and color, and thus I’m attacking them one by one rather than writing an “action” (basically a script that applies the same steps to every file in a folder). I tried that early on, but applying the same criteria to every page simply resulted in different problems that then had to be separately addressed. 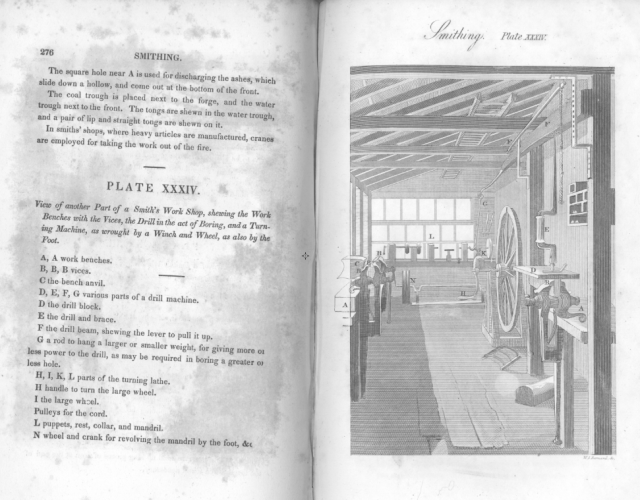 And of course, I want to maintain as much detail as possible on the gorgeous engravings – so I can’t remove too much gray, or else they won’t be nice and crisp.

I’m about done with the page cleanup, and will soon be setting up a template to get started on the layout – but it will look a bit like this, though with more subtle transition from the placed images to the page:

* The AIC site mentions the term was first used in 1848 and refers specifically to Reynard the Fox – which would make sense; he’s a troublemaker!

14 Responses to On a Fox(ing) Hunt