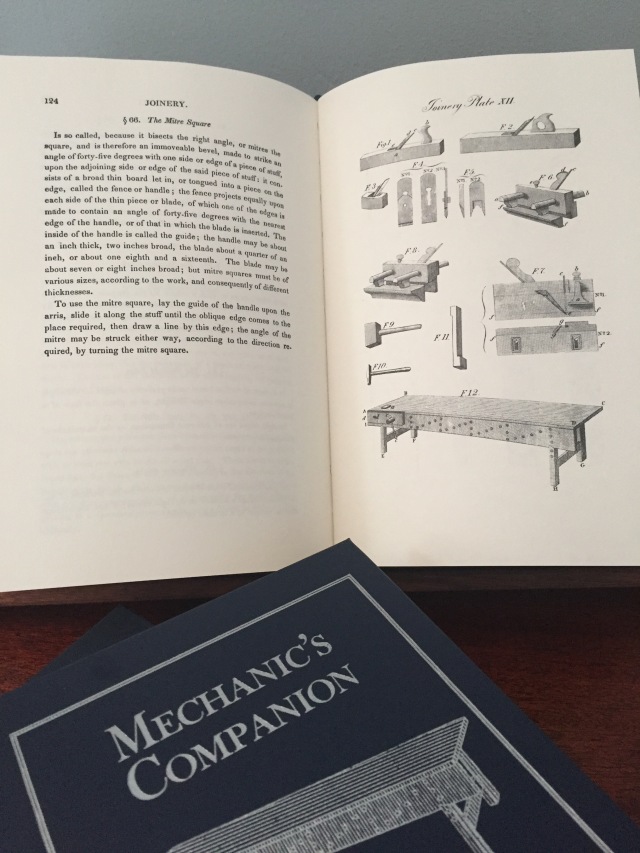 Last week, 99 boxes of “The Mechanic’s Companion” arrived on my sidewalk, and one by one, I hauled about one-quarter of them up the stairs and into the house. Two by two, Christopher Schwarz hauled in the other three-quarters. (He is strong and generous.) I taught a class over the weekend, so I wasn’t able to get pre-publication orders packaged, addressed and in the mail until yesterday and today – but I’m delighted to report they’re now all on their way. And I’m ready to ship to select international and domestic retailers with whom I’ve talked about carrying it – more on who they are as I get those orders confirmed. (I do, however, have plenty remaining should you wish to order a copy.)

The die-stamp image on the book’s cover is the bench (with some of the lines removed so as to make a crisp stamp); it’s the first tool about which Peter Nicholson writes in his joinery section:

Benches are of various heights, to accommodate the height of the workman, but the medium is about two feet eight inches. They are ten or twelve feet in length, and about two feet six inches in width [about 12″ wider than my bench!]. Sometimes the top boards upon the farther side are made only about ten feet long, and that next the workman twelve feet, projecting two feet at the hinder part. In order to keep the bench and work from tottering, the legs, not less than three inches and a half square, should be well braced, particularly the two legs on the working side. The top board next to the workman may be from one and a half to two inches thick: the thicker, the better for the work; the boards to the farther side may be about an inch, or an inch and a quarter thick. If the workman stands on the working side of the bench, and looks across the bench, then the end on his right hand is called the hind end, and that on his left hand the fore end. The bench hook is sometimes covered with an iron plate, the front edge of which is formed into sharp teeth for sticking fast into the end of the wood to be planed, in order to prevent it from slipping; or, instead of a plate, nails are driven obliquely through the edge, and filed into wedge-formed points. Each pair of end legs are generally coupled together by two rails dove­tailed into the legs. Between each pair of coupled legs, the length of the bench is generally divided into three or four equal parts, and transverse bearers fixed at the divisions to the side boards, the upper sides being flush with those of the side boards, for the purpose of supporting the top firmly, and keeping it from bending. The screw is placed behind the two fore legs, the bench hook immediately before the bearers of the fore legs, and the guide at some distance before the bench hook. For the convenience of putting things out of the way, the rails at the ends are covered with boards; and for farther accommodation, there is in some benches a cavity, formed by boarding the under edges of the side boards before the hind legs, and closing the ends vertically, so that this cavity is contained between the top and the boarding under the side boards; the way to it is by an aperture made by sliding a part of the top board towards the hind end: this deposit is called a locker.