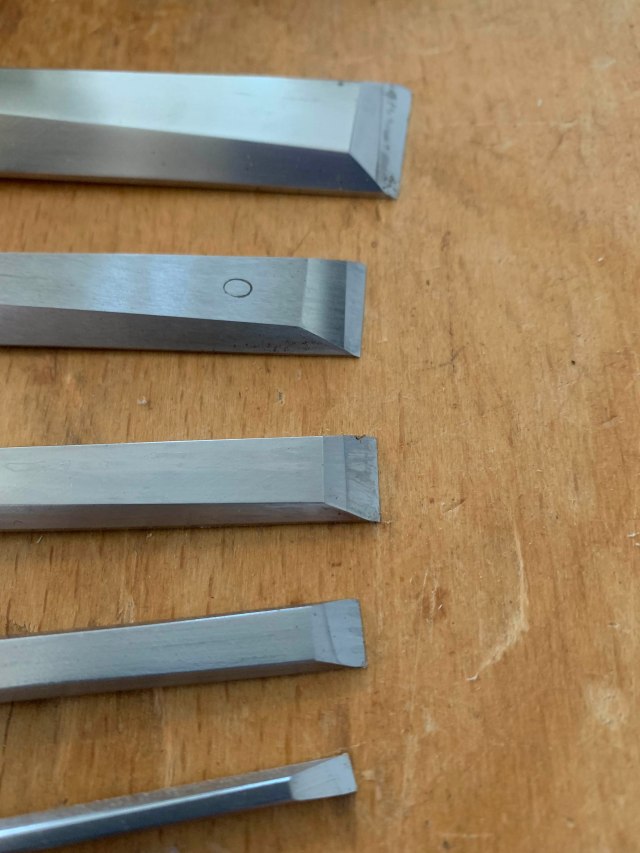 These secondary bevels are embarrassingly wide.

I always avoid grinding far longer than I should (unless I hit a nail or something else catastrophic to a cutting edge). But with a year’s worth of loaning tools out to students and hundreds of dovetails of my own this year, it was a job on which I’ve procrastinated for far too long, on all my chisels and bench planes.

My secondary bevels (35°) were on most of my tools wider than my primary bevels (25°). As a result, my edges have breaking down quickly, and I’ve had to sharpen and hone a lot more often than I should. This has for weeks (months, really) not only been a waste of time, but also means I (and students) have been sharpening and honing a lot more steel than necessary, and as a result, probably not doing a very good job of it.

So today I sucked it up and pulled out Christopher Schwarz’s Veritas Mark II Sharpening System to regrind the primary bevel. Are grinding wheels faster? Yep. But (to my shame) I’m a bit scared of grinding wheels. I prefer the reliable consistency that a disc grinder and guide provides to the need for user skill and paying attention when using a wheel. (Note: I’ve also used and like the Work Sharp, and if I had carving and lathe tools to grind often(ish), might prefer it to the Veritas machine…but I rarely carve or use traditional lathe tools, so…).

I’d say the Veritas system is foolproof, but there’s always a bigger fool. But it is easy. Clamp the blade in the blade holder, using the setting jig to get the right projection for your desired angle, then rest the blade holder on the properly set tool rest, and lightly touch the blade to the right side of the wheel, moving it across the sandpaper to spread the wear. Stop every few seconds to make sure the blade isn’t too hot to touch (and if it is, dunk it in water), and keep grinding until your secondary bevel isn’t as wide as the Ohio River in spring (as mine were) – or until any nicks are gone, if that was the issue (as it was on two of mine, that I suspect had been dropped). Chris has a good video on it here.

I reground five Lie-Nielsen chisels and three blue-steel Japanese chisels (cue the slings and arrows…to which I say, so what; it works) and three Lie-Nielsen bench plane blades. It took me a couple hours (the penalty one pays for waiting too long), then another 45 minutes or so to sharpen and hone them all (on my Shapton Pro #1,000, #5,000 and #8,000 waterstones) and clean out all the grimy crevices on my plane bodies. 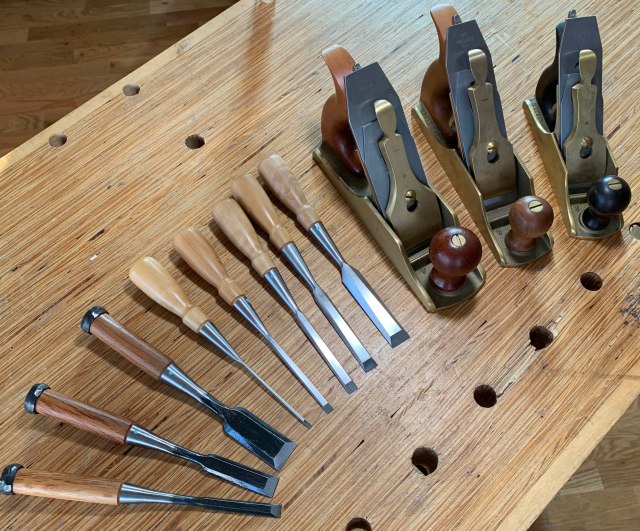 I do still need to regrind my jack plane iron, but for that, I’ll just have to stay awake at the wheel – the 10″ radius I want on that blade can’t be done on a disc grinder.

The only problem I encountered was being too stupid to keep a swarf rag handy. Now I have to wash it out of my jeans.