Cleanliness is Next to Craziness 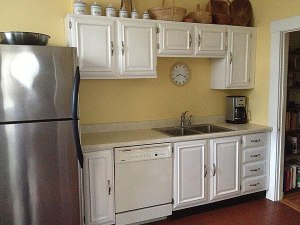 I’ve done everything within my power and budget that my realtor asked of me – except hide the coffee maker. I just can’t live without it handy and accessible.

I had two showings tonight, there’s one tomorrow and one on Sunday, along with a two-hour open house. While I am eager to sell my house so that I can buy another, I’m more eager not to have to keep this one looking (as much as possible) as if no one actually lives here. I know many people have to do this for months on end. I also know that I will not be able to survive this for months on end with my sanity intact.

1. Having to wipe down the entire shower, including the floor, every morning. God forbid a drop of water would make someone realize that the person who lives here has the temerity to bathe.

2. Getting rid of the hand towels that usually hang on a magnet on the refrigerator door.

4. Having to constantly wipe the soapy fingerprints off the handle to the cabinet under the sink because of 3…which again requires the towels inside.

5. Keeping the kitchen counters free of absolutely all things. (I balked at hiding away the coffee maker. That’s a bridge far too far.)

7. Vacuuming constantly due to 6. (And cat hair)

8. Making the beds to high-end hotel standards every morning…then smoothing out kitty footprints in an OCD-like manner just before skedaddling (all the while knowing they’ll jump right back on as soon as I’m gone).

9. Making sure the flower vase on the mantel is full of fresh blooms, artfully arranged. (Which are then immediately dis-arranged by Miss Viola.)

10. Coming home after a showing to discover that, while in general the house looks pretty darn nice, one of the cats has hacked up a gargantuan hairball in the middle of the living room floor. Please let that have happened after the viewers left.

9 Responses to Cleanliness is Next to Craziness