The View From ‘My’ Front Porch (For a Week)

I live in the city, and have become inured to the nightly sirens, train whistles and cars driving by at all hours. (Now if only I could get used to the neighbor’s Hammond organ at odd hours – though that’s been less of a problem of late – and the occasional 3 a.m. fights on the sidewalk).

Last week, however, I had the soothing sounds of cicadas, a fast-moving stream and birdsong filling my ears. Plus eight-nine hours per day of 11 wooden mallets whacking chisels, miter saws clanging into the guides on miter boxes and rubber mallets knocking together and taking apart test-fits on full-sized English tool chests. (Which beats a Hammond organ and fights any day.)

For my summer vacation, I spent a week helping out in Christopher Schwarz’s tool chest class at Roy Underhill’s school (The Woodwright’s School) in Pittsboro, N.C. Both Chris and I stayed with Roy and his wife, Jane, at their lovely mill; Chris was in the guest room in the converted mill, and my quarters were across the lawn in the recently completed guest house (which doubles as Roy’s office).

It’s a restful, bucolic setting, and I’m honored that Jane and Roy invited me to stay there. I ask you – How many other toilets afford a view out the window of a doe and fawn out for a morning stroll? (I, er, couldn’t get to my camera to take that picture….)

We drove the eight hours back to Greater Cincinnati on Saturday (apologies to Chris for my three-hour playlist of singer/songwriter music, to which I loudly sang along), then I had to hurriedly unpack my suitcase (I typically let it sit for a week), do the laundry and vacuum. I had a 10 a.m. showing on Sunday, and after a week of late nights, early mornings and possibly a few too many adult beverages, there was no way I was going to get up early on Sunday to take care of all that. 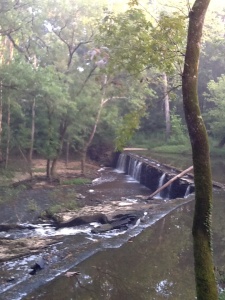 So I’m back in the city now, and back to being worried about selling my house – and I’m hoping fervently that with summer coming to a close, the young folks who tend to populate my neighborhood will be back in a house-buying mindset.

The house I’ve been hankering for is still available (plus my contingency contract doesn’t expire for another two weeks). But there’s now a niggling thought in the back of mind about how nice it would be to get a new place with a view of a mill stream and waterfall, with deer ambling through the yard – instead of a view of the neighbor’s house mere yards away. For that, however, I’d have to go a bit outside of city (and county) limits – and my idea of a bearable morning commute is no more than 20 minutes.

Perhaps I’ll make myself some nice deer yard art instead. And the Brood X 17-year cicadas are due to emerge in Cincinnati in 2017; I doubt I’ll find them soothing. Bring on the sirens. (Still, I wouldn’t mind another week or three in North Carolina.)

p.s. Apologies for the fuzzy photos…the iPad camera is crap.