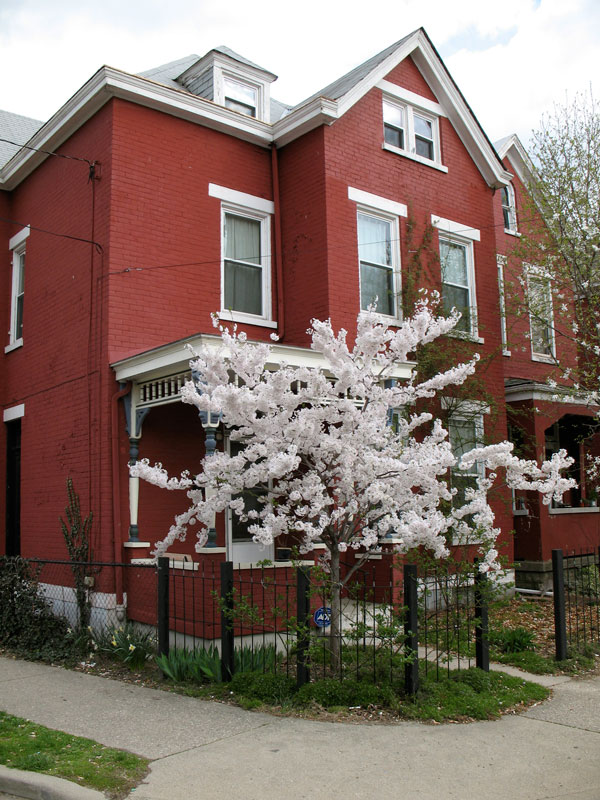 My house, as it looked eight years ago. Yawn.

Today, I got the best feedback I’ve had from a showing: “It feels like home.” (And the showee is currently looking for financing – my fingers will remain tightly crossed.)

I’ve been discouraged as of late because house sales, after a summer doldrums, have been hot in my ‘hood for the last few weeks – but almost everything that’s sold in the same general price range as mine (that is, $150-$225k) has been newly redone, with a snazzy new kitchen and flashy new bathrooms.  (And that’s why mine is closer to that $150k threshold.)

I’ve toured every one for which there’s been an open house, and while I certainly concur with their buyers that the places are nice, they’ve all seemed sterile to me. I can’t imagine flipping a house. In the midst of re-doing mine, I’ve lived in it, and made choices that may not appeal to a wide swath of people – but they appeal to me.

Instead of knocking out walls to create an open floor plan (which is still very hot in Northside, it seems), I patched in period mouldings on the original door frames where they were missing or simply wrong. I restored as much of the original heart-pine floor as possible – and yes, there are a few small gaps. That beats Pergo by a mile, as far as I’m concerned. (I’ll concede that I should have put in a heated floor in the bath; I missed a trick on that one.) Not all the walls in my house are neutral (though none are crazy colors…are they?!). And my kitchen fits the style of the house (though I did buy stainless appliances) rather than what a certain Swedish outfit sells. And the slate, buttercup and mossy green outside? Well, strictly speaking, it’s not period-correct…but I was going for a subdued version of a “painted lady” – and those have been around long enough to count as historically valid (that’s my argument and I’m sticking to it).

I vowed as a child that some day I’d live in a brand-new house with excellent heating and cooling, windows that didn’t require one to switch out the storms for screens and vice versa twice a year, an actual furnace rather than a boiler that required daily attention, no period wallpaper and furniture that I was actually allowed to sit on. (We lived in an old brick farmhouse, Magnolia Stock Farm, with a lot of antiques that were for show rather than for use.)

But I guess listening to my mother’s lectures on architectural integrity and antiques stuck with me – at least in part; during my formative years she worked for various preservation leagues in Louisville, and later for the National Trust for Historic Preservation in Washington, D.C.

Now, I turn up my nose somewhat at “contemporary” and “new” (at least as far as houses in my price range go); I like old stuff and houses on which the exterior and interior match in style, and I find storm windows rather charming (easy for me to say – my house came to me with cheap replacement windows already installed, so I replaced them with double-glazed). I do not care for open floor plans (too hard to keep such an open space clean!) and not every bedroom requires an attached bath. But I have no wallpaper in my house, and one can use every piece of furniture I own (except my darn baby bed that I can’t seem to get rid of).

So I’m glad at least one person seems to agree with me – I’m hopeful she’ll find the means to make what “feels like home” indeed be so.

Then I can buy the Arts & Crafts house I want…complete with the original storm windows.