What Happens When I Run Out of Red Ink 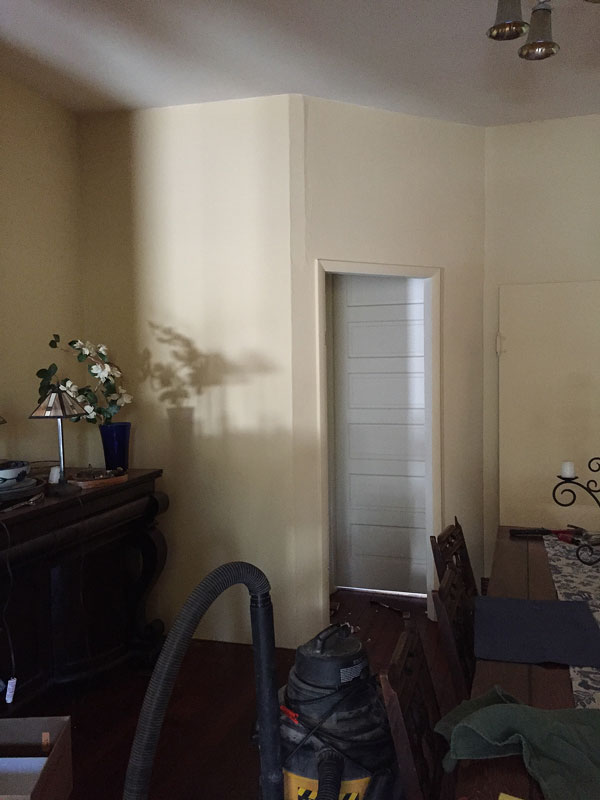 Before (with the swinging door already removed).

Last weekend I had three chapters to edit for Christopher Schwarz, a book editing project, some other freelance work and a house to clean. But my last red pen died; rather than go buy more, I instead destroyed more of my house.

Like the wall in the entrance hall I tore down a few months ago, this one was put up in the 1950s I assume, given the similar materials and inability of the installer to sink nails (and too many of them) in a straight line.

This wall created a narrow (31″) hallway from the kitchen to a full bath, and it walled off the bathroom door from the dining room (which was likely used as a bedroom when the house was a two family). But despite a swinging door in the wall and short route, it was decidedly less trouble to go through the front hall and into the dining through the front. Thanks to settling (or perhaps never being plumb) that door swung easily in only one direction.

No original trim was destroyed in the building of this hall. A miracle.

A few hours and a fair amount of dust later (yes, I wore a respirator), I had most of the gypsum down and was delighted to have uncovered the still-there original trim behind the stud (whew). Everything is now in a pile under the wide overhang on my garage. It will likely stay there until spring. 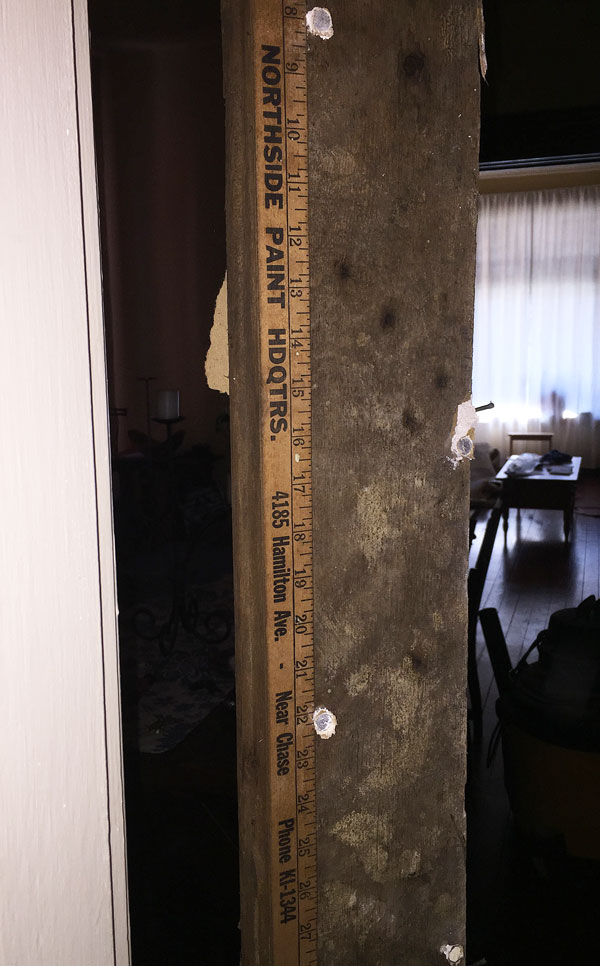 I did find one nifty thing – used as a shim was an entire yardstick promoting a Sherwin-Williams paint store in my neighborhood (that address is now an H&R Block storefront). Note the phone number. So I used my moulding bar to carefully remove the yardstick in one piece. I’m not sure what to do with it…use it? (I don’t really need it.) Hang it above my workbench? (Cracker Barrel decor). I don’t know – but I couldn’t throw it out.

Oops on that ceiling. The top plate was screwed in, not nailed. Screws don’t pull out quite at cleanly.

With that wall down, it becomes more obvious that either the door to the kitchen is also not original, or that it was blocked in and made shorter and narrower at some point…but why? My best guess is that what is now the bathroom was a butler’s pantry that connected the kitchen and dining room (there are still a couple intact butler’s pantries in houses in my ‘hood of the same vintage and basic design). You can see in the bathroom wall that a doorway to the kitchen has been filled in.

While it’s now much more convenient to get between the kitchen and dining rooms (good thing, given that I’ve 13 dinner guests on Thursday), I’m not terribly comfortable having a bathroom right off the dining room. That’s weird. And unappetizing (any guests reading this, please use the upstairs WC).

But I haven’t time to decide on a solution right now (other than simply closing the door). I bought more red pens, and must now put them to use.