Sean Gundrum, of TPG tile (I think he got tired of me watching him…but the swirls! So pretty!).

Two days ago, my neighbor and expert tile guy Rick Wolf (Wolf Custom Tile), called me late in the day. “We have an opening in the schedule and can be there tomorrow to get started on your shower pan.”

Never start a land war in Asia, never go up against a Sicilian when death is on the line, and never say no to a long-awaited contractor who has an available time slot. So that night, I hurriedly ordered my floor tile. Yesterday, I got a call from the distributor; the tile I want is out of stock, and they are awaiting a shipment. Of course.

I didn’t think it would be a problem to find 1″ porcelain hex tile; it’s quotidian (unlike the hugely expensive 1″ hex soapstone tile that I really wanted…but decided against because, er, full-time freelancer here…). Except that the 1″ porcelain hex tile I wanted apparently isn’t.

I settled on matte tiles in both white and black – not already in a pattern, mind you, because I’m making my own pattern. So the two colors have to be in tiles of the exact same size and sheen, and on a mesh backer rather than that weird “new and better” rubbery stuff some companies are using now to hold mosaic patterns together. (Because that stuff really does hold all the tiles perfectly spaced. Permanently. You can’t pull out individual tiles for pattern needs, except by using a razor knife to cut the stuff then scrape off the residue. No thank you.)

The tile was hard to find – and it will be at least two weeks before it is delivered…by which time the very nice (and professional and neat) guys who were here today (Sean Gundrum and Tore Pastura from TPG Tile; they do a lot of work for Rick) will be on another job.

Still, having Schlüter KERDI on the walls and a curb in place is a massive step forward.

I’m told that, once the pan is done and the floor tile is in, I don’t actually have to tile the walls to use the shower; this stuff is waterproof. (Still, I think I’ll wait for the wall tile…)

By tomorrow, the self-leveling underlayment will have dried, and they’ll work on the shower pan (also Schlüter), which has to be custom-made (or custom-fit or custom-somethinged, because the shower is a weird size). And they kindly offered to install the HardieBacker in the rest of the bathroom, too, to a) save me the trouble and b) because they’ll have mortar mixed already. That’s awesome – I have no doubt Sean and Tore can do in an hour what would take me a day. Or two.

And hopefully, by the time my floor tile is in and they have room again in their schedule, I’ll have a few more editing or woodworking jobs (or both) lined up – then I can pay them to do all the tile, while I concentrate on my own areas of expertise. Said areas don’t, it seems, include installing a level sub floor. 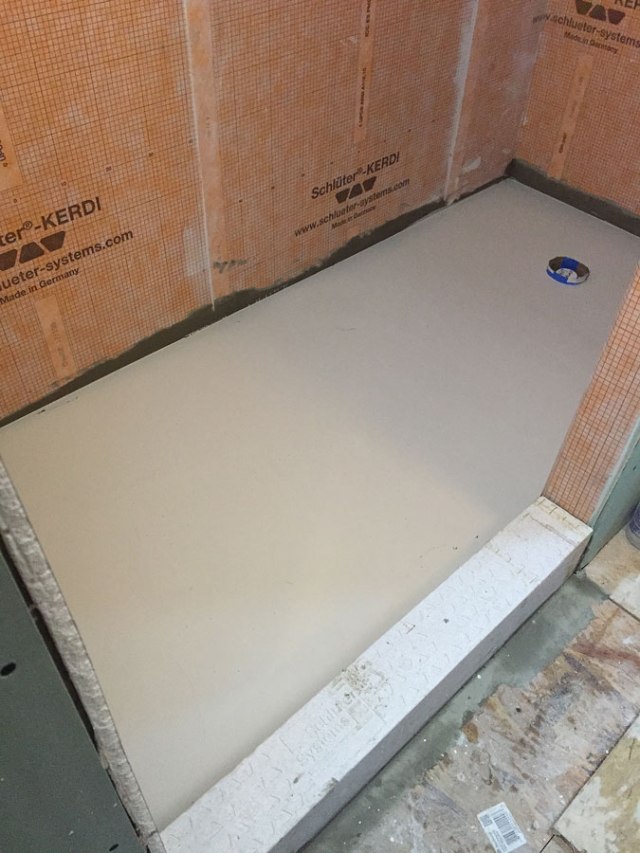 Yes, yes – the need for a self-leveling layer is a bit embarrassing. But it’s a lot faster than trying to get a level sub floor over a 38″ wide x 8′ long area in a 1906 house in which absolutely nothing is square or level.

Woodworker, writer, editor, teacher, ailurophile, Shakespearean. Will write for air-dried walnut.
View all posts by fitz →
This entry was posted in Baths, Renovation/Restoration. Bookmark the permalink.